Automation to run VMs based on vanilla Cloud Images on Firecracker

Automation to run VMs based on vanilla Cloud Images on Firecracker

This blog post is a part of a series of posts devoted to Firecracker automation. Currently it consists of the following posts:

Why some Firecracker automation would be helpful

Firecracker is a lightweight VMM (Virtual Machine Monitor), a VM “controller” layered on top of KVM, created an open sourced by AWS. The virtual machine runs as a process in your host OS, and is designed for simplicity and security. This post is not about Firecracker itself, but if you are not familiar with it I recommend diving deeper.

Firecracker is started as a process per VM, typically listening on a file-based socket for HTTP requests to its API for configuration and VM lifecycle operations. Passing all the required configuration becomes a bit tedious and is a great candidate for scripting.

Besides, it would be ideal to run vanilla cloud images, as produced by the different distros, on Firecracker. This is possible and was enabled when initrd support was added. Still, you need to download the cloud image and modify it to potentially add SSH keys, change the default user’s password, configure the network, etc.

At the end of the day, both configuring and starting Firecracker, and preparing the cloud images to connect and use them, requires a fair amount of effort. The main goal of this post is to show some automation for these tasks, and offer a simple way to run cloud images, as provided. Key to this automation will be the use of cloud-init, a pervasive initialization software that is included in most cloud images, allowing to configure the image on first boot, based on provided metadata.

The created automation should be good to launch multiple VMs. Multiple Firecracker processes will be then needed (one for each VM), and one socket file for each too (for Firecracker’s API to listen to our commands and launch the VMs). Then, we will need one “disk” for each VM. A disk for a Firecracker VM is just a file on the host OS containing the root filesystem. So it will suffice to download the cloud image, make some minor scripted adjustments to it (more on this later) and then use it as a template –basically, copy the root filesystem to the file that the VM will effectively use.

What about networking? Firecracker allows you to specify a tap device to be passed to the VM. These tap devices will then have one endpoint on the VM and another one on the host, allowing the network traffic to flow. In order for the host OS to communicate with the VMs, and the VMs to communicate among each other, a Linux bridge will be used, where all the host endpoints of the tap devices will be connected. The bridge will have its own IP on the same network (enabling host processes to reach the network on the VMs), and then will be MASQUERADEd via iptables to allow the VMs to reach the Internet.

Additionally, a second tap device will be added to the VMs. It will not be connected anywhere on the host or be given any IP address on the host. This tap device will also have the special Firecracker property allow_mmds_requests, which enables communications from the guest VM to the HTTP metadata endpoint to access Firecracker’s metadata service (MMDS). This metadata service is what will be used to provide the necessary information for the VM to configure itself on first boot. The MMDS could have been enabled just on the main tap interface; but both for performance and security reasons, it is better to have a separate tap device just to access MMDS. 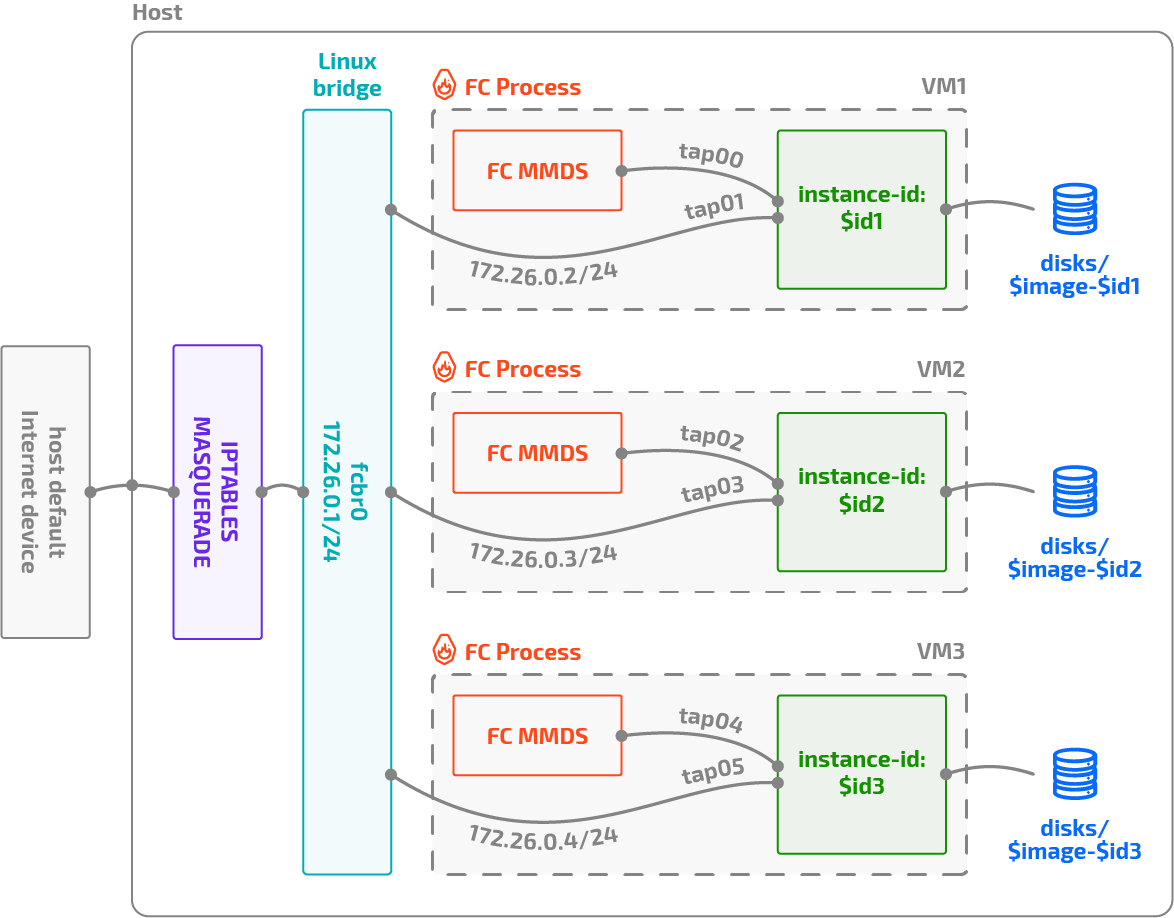 Key to all the process is cloud-init. It is installed by default on most cloud images, and runs on first boot, configuring the VM. cloud-init supports several methods (“sources”) from where to feed the necessary metadata on how to configure the instance. Here I will be using one called nocloud-net, which is specific for on-prem environments. It supports fetching all the metadata from an HTTP endpoint, which is a perfect match for Firecracker’s MMDS service. It will suffice then to write the cloud-init necessary metadata from the host to Firecracker’s MMDS service via its API, and the guest VM will connect to the URL provided as the seed for nocloud-net cloud-init datasource, and fetch it. Configuring nocloud-net can be easily achieved by passing to Firecracker’s boot source configuration the following additional Linux kernel command line argument:

(see conf/firecracker/boot-source.json). Here 169.254.169.254 is the address where by default the MMDS service is accessible from the guest (can be changed via Firecracker’s API if desired) and /latest is part of cloud-init’s API when accessing metadata (more precisely, it’s a versioning field).

But how do we connect to the metadata IP service? We should firstly configure the network, in particular the tap device that would be configured for MMDS access. Fortunately, we can also pass a network configuration via a kernel command line argument (network-config), from where it will be read by cloud-init. It must be a Networking Config Version 2 YAML file, base64 encoded (can also be gzip’ed before encoding –used here). The applied configuration will be derived from the file conf/cloud-init/network_config.yaml.

Upon boot, cloud-init will then read the kernel command-line arguments explained, and will configure eth0 inside the VM, the device that is allowed to communicate with the MMDS API, with an IP able to access the MMDS range; and eth1 with an IP in the range of the internal network of the VMs. Remember that eth0’s host tap endpoint is not connected anywhere, while eth1s host tap endpoint is connected to the bridge (and NAT-ed). Note that because of this, the IP address of the eth0 device can be made the same on all VMs.

Once the network is configured, it will follow the nocloud-net datasource configuration, and connect to the HTTP endpoint, accesible from eth0. According to cloud-init, it will need to fetch two files from the metadata service:

Thanks to this process, once the VM is booted, it will have its network configured and will be accessible from the host (thanks to the IP assigned to the bridge) via password-less SSH and with sudo permissions. Just like your regular EC2 instace!

All the automation has been written on a series of –a bit hackish– shell scripts. They are only intended for demonstration purposes, and definitely have a lot of room for improvement. All the source code is publicly available.

To use the automation, please review first the README.md file and see if you want to modify any values in variables. Note that this will only run on a bare metal Linux system or a Linux VM with support for nested KVM virtualization. Follow the next steps:

Once you launch the VMs, you should get an output similar to:

During the process, I came up with some questions, mostly for the Firecracker and cloud-init communities. Feel free to drop some comments if you have an opinion!

This post and the referenced source code should allow you to easily use Firecracker, and use a wide catalog of pre-built OS images, without having to go through several and tedious steps. Being these VMs so lightweight and fast to start, this setup is convenient for quickly fire VMs on your local environment (i.e. laptop) for quick experimentation. Moreover, Firecracker allows you to overprovision CPUs, so you can launch more VM cores than you really have.

Introduction Using the RDBMS only to store data is restricting the full potential of the database systems, which were designed for server-side processing and provide other options besides being a data container.

63-Node EKS Cluster running on a Single Instance with Firecracker This blog post is a part of a series of posts devoted to Firecracker automation. Currently it consists of the following posts:

Repository, Tuning Guide and API for your postgresql.conf postgresqlco.nf (aka postgresqlCO.NF, or simply &ldquo;CONF&rdquo;) was born a little bit more than two years ago. CONF&rsquo;s main goal was to help Postgres users find more and easier help to understand and tune their postgresql.

Free 1GB Postgres Database on AWS CloudShell TL;DR AWS CloudShell is a CLI embedded in the AWS Web Console. It is meant to make it easier to run the AWS CLI, SDK and other scripts from your web browser, without having to install anything locally or having to deal with local credential and profiles management.

We like open source, we develop open source software, and we are very active and well known at Postgres community. We build very innovative projects in Postgres ecosystem and are the founders of Fundación PostgreSQL.

Contact us
We are currently working on more awesome stuff

Subscribe to our newsletter to be up to date!